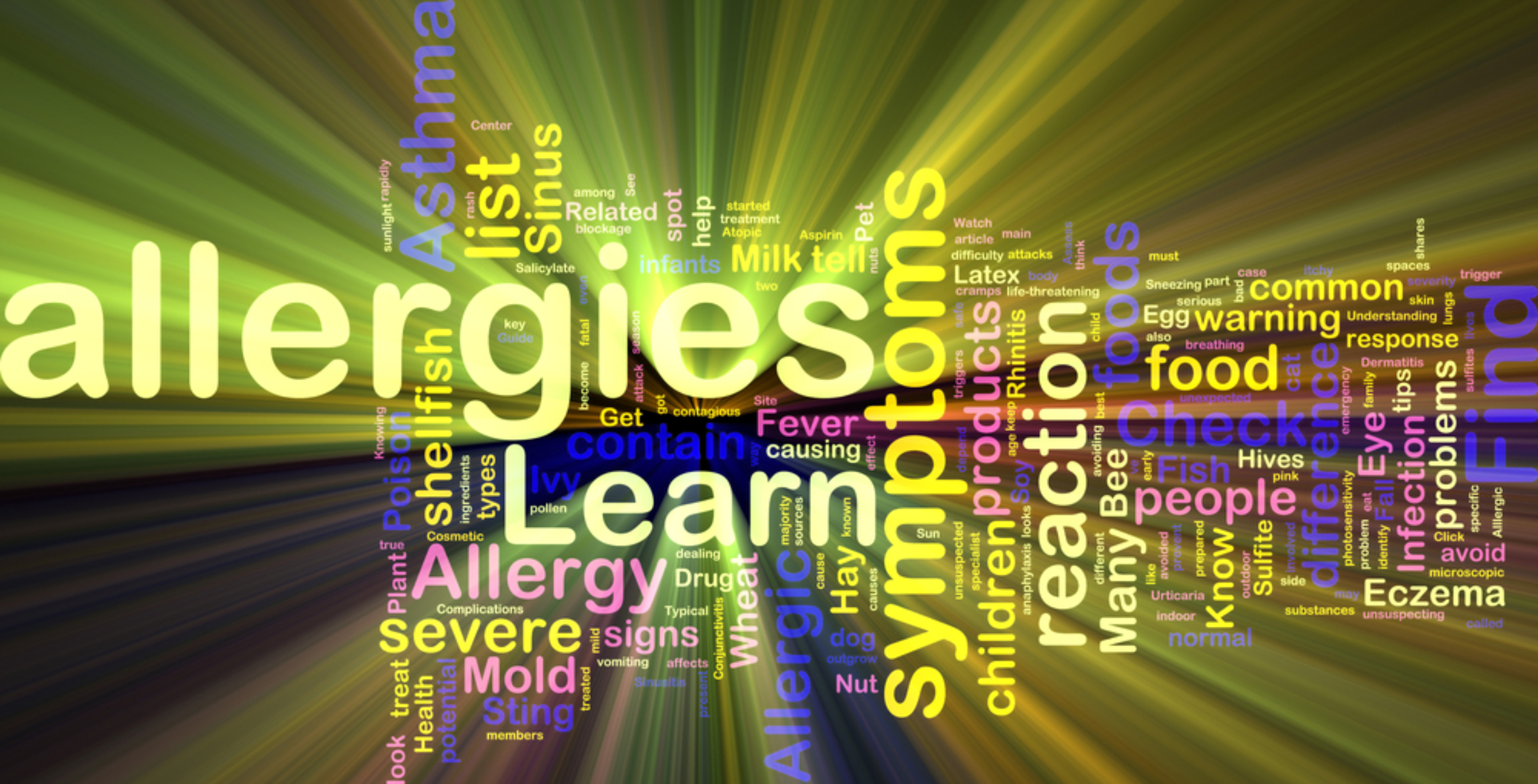 Allergies involve an abnormal reaction by the body’s immune(defensive) system to substances in the environment (including food), in which excessive Immunoglobulin E (IgE)is produced, which in turn provokes increased Histamine secretion to cause an inflammatory process.( A different type of immunoglobulin was found in allergy sufferers in 1967 by Kimishige and Teriko Ishizaka called gamma IgE).It is generally believed that there is a hereditary malfunction, and that the various types represent symptoms of an underlying condition which is purely aggrevated by various factors.SYMPTOMS:These vary from patient to patient and in different conditions; –Hay Fever,or allergic rhinitis involves a runny and/or blocked nose,sneezing, itching inside the nose,irritation of the ears and throat and discharge at the back of throat.–Eye allergy(conjunctivitous), an inflammation of the tissues inside the eyelid caused by a reaction to an infection, chemical, dust etc.It causes itchyness, blurred vision, lacrimation(tear production) and swelling. Like plant rash, it can occur in those not prone normally to allergy.–Asthma.–Eczema.–Hives or urticaria, consists of an eruption of wheals of varying sizes on the skin which are very itchy and red possibly with a whitish centre.–Plant allergies:generally to oak, ivy and sumac are called contact dermatitis, as they cause an reaction in peolpe who are not necessarily prone to allergic reactions; the result is a red, itchy eruption in the contact area sometimes resulting in blistering.–Allergic Vasculitis:usually caused by a violent reaction to a drug leaving the patient with dark coloured blotches and spots on the skin, blistering and even ulceration in extreme cases, –Anaphylaxis:an extreme whole body allergic reaction where histamine is released all over the body causing multiple symptoms including feint feelings, passing out, stridor, wheezing, stomach cramps, heart attack, nausea, diarrhea, loss of bladder control, itching, rashes, and a state of anxiety. Triggers:the commonest allergens are the following: -food ( especially fish, shellfish, peanuts, walnuts, eggs, milk)-medicines especially when more than one is being used at the same time (drug interactions)-house dust mites-chemicals such as acid anhydrides( used in the manufacture of polyester) and isocyanates( used in the manufacture of foam), sulphur dioxide, cigarette smoke, ozone, nitrogen oxide, woodburning stoves, “sick-building syndrome” ( in which workers develop sensitivities due to the enclosed work environment-cockroaches: a common problem in poorer living conditions where children react to matter from cokroaches-mould-nickel-pollen-pet fur/dander-insect stings-sun allergy where the sun triggers a reaction in the skin-semen allergy: quite rare but this can cause a contact tissuereactionDiagnosis: –Blood Testing or radioallergosorbent test ( RAST), to detect the allergen-specific IgE antibody, –skin testswhich may be a prick/scrath test, skin injection test, patch test, –Challenge testswhere the patient inhales or drinks or eats a small amount of a suspected allergen,–White blood cell differential count.

Orthodox treatment: –Corticosteroidscome in different forms, nasal sprays such as Nasonex for hay fever, inhalants such as Flovent for asthma, eyedrops for inflammation within the eye, and in the form of pills or liquids such as Prednisone. –Decongestantstaken orally (Sudafed), as nasal sprays and eyedrops. –Antihistamines:which block the over production of histamine during an allergic reaction, again these can be taken as sprays(Patanese), orally (Claratin), and as eyedrops (Zaditor). –Imunotherapy:this involves injections or taking tablets of tiny amounts of the allergen and gradually increasing the dose often over a period of 3-5 years until the patient achieve a level of tolerance. It is especially effective for grass pollen, venom, cat hair,dust mite and some foods. –Epinephrine shots:often carried by sufferers for self medication (Epipen) in case of extreme reaction to an allergen like peanuts. –Monoclonal antibodies suchas Omalizumab are proteins which help nutralise the effects of increased antibody IgE which is found in increased levels in the blood of allergy patients. –Leukotriene Inhibitors:these drugs interfere with the way that Leukotrienes (chemicals which increase the inflammatory response in allergy sufferers)work.-Some treatments involving putting drops of high dosage allergens under the tongue have proven to be very effective, this is a common treatment in France for example. –What next? DNA vaccines, and phosphodiesterase-4 drugs to open up the airways are being developed.

HOMEOPATHY + ALLERGIESIn homeopathic terms allergies are a sign that there is a malfunction in the body, or it can be seen as alarm bells that the body is being exposed to environmental toxins. Our approach is to run a full check of the body using the Vegatest (computarised homeopathic testing system) to find out where there may be malfunctions, and to discover whether patients are over-reacting to contact with various substances this is an intagral allergy test).depending on the results, we then use a combination of homeopathis remedies (which stimulate the body to heal itself), a prescribed list of allergens the patient needs to avoid, dietary advoce, and lifestyle changes.Homeopathy can be very effective in treating allergies as has been found in recent research an example of which is: there is more and more evidence to show the benefits of homeopathictreatment: eg. “Advances in homeopathy and immunology: a review ofclinical research”, Department of Pathology and Diagnostics, Universityof Verona, Italy”.